DEBUG: https://assets.nationbuilder.com/london4eu/pages/5/features/original/heart_photo.png?1501497680
DEBUG:
DEBUG: blog_post
A programme for the UK after the referendum

A series of blogs argued that we could not go back to the way things were even if we won the referendum, that a post-referendum Prime Minister’s key rôle was to heal the country, and suggested that we needed the political parties to put forward new policies on the theme of Take Back Control.

We asked for your ideas of symbolic and substantive policies that would heal the country. We published a selection here and George Stevenson’s article based on a Churchill quote “In Defeat, Defiance; In Victory, Magnanimity".

We now publish Richard Burnett-Hall’s programme for post-referendum strategy that could be picked up by political parties seeking to heal the country: he focusses on the need for devolution to regional governments in order to ensure that the benefits of trade are shared more widely. That would also lead to constitutional reforms at Westminster and need a new financial settlement, including a Green New Deal.

By way of background, I am a convinced Remainer.  Spending some nine months in war-ravaged (and partly Russian occupied) Austria, mostly Vienna, in 1954, when I was 19, convinced me not only of the need for the countries of Europe to come together to create a new European entity, but also that the UK should take the lead in setting this up – as the many Austrians I talked to on the subject also wanted.  The Austrians could not understand why we seemed so reluctant to engage.  No more could I, and I found our eventual rejection of any form of participation disappointing in the extreme.  At least a partial answer was provided by the Suez fiasco two years later, when I realised how distant all too many of my elders and betters in Britain were from the realities of the post-war world in which I had come of age.  How little has changed since then, despite over 45 years of EEC/EU membership.

The flaws in the referendum campaign and in Brexit

I am convinced that the opposition in the UK to Brexit is right and, if Brexit happens, it will quite soon thereafter be seen to have been a grievous mistake.  Nevertheless, merely opposing Brexit on economic grounds is far from enough, justified though that is.

Since the referendum the views of those who voted for Leave have come in to the open, as has the much wider support for them than I, and evidently Cameron and his government also, had originally supposed existed.  Sadly, it has become abundantly clear that the peddling of untruths about the EU by the tabloid media and others over decades has led to a great deal of hostility to it, most of which is wholly undeserved, and should have been directed at the series of UK governments that have failed the electorate, and have been happy to see the EU take the blame.

That the EU has its defects – not least the premature introduction of the Euro, and forcing it on to all new applicants for EU membership – I fully accept.  But the UK is far from the only member state to be fully aware of these defects, and with the UK as an actively constructive, full member advocating reforms, willingly supported by others, we could achieve much within the EU to address legitimate objections.

The need for UK reforms

Domestically, we should be seeking to install at Westminster a government that will pursue numerous reforms that seek to put right the very real and understandable causes of Brexit.  As mentioned above, many of these are due to failures of the UK government over the years.  The immigration issue has been hugely exacerbated by the failure of the UK to introduce simple controls, such as identity cards, which are seen as essential tools on the Continent, enabling the deportation of EU immigrants in accordance with EU law, and all the while non-EU immigration – over which we of course have always had total control – has appreciably exceeded the economically generally far more valuable immigration from the EU.

The country as a whole has benefited from global free (or at least relatively free) trade, but those benefits have not been fairly shared.  Far too high a proportion of them have gone to those who were already very well provided for, while those who have lost their livelihoods in consequence have received hardly anything.  Lowering excessive taxes is undoubtedly a good aim in principle, but not if that prevents decent treatment of those who have lost out through no fault of their own.

The alienation from our London based government of those voters many of whom have been left behind by the development of global trading relationships is real and wrong.  This can only be addressed by introducing genuine regional government throughout the English regions, to give them powers comparable to those enjoyed by the other three nations.  The creation of elected mayors for major conurbations is a distraction from this, as the policy fails to recognise the vital and intimate links between those conurbations and their more rural hinterlands, which are as a result even more isolated than before.  Regional government would bring citizens much closer to those who govern them, as well as creating more democratic accountability of those in charge.

The Scots and Welsh are well aware of this and both are now seeking even greater devolution in consequence.  Drawing the precise boundaries of those regions would of course be potentially quite contentious, and should be debated publicly.  Nevertheless, I suggest that the starting point should be the (now nine) “Government Office regions” established in 1994, and which to this day make up the different regions that send MEPs to the European Parliament. These have populations that, very roughly, compare with those of Scotland, Wales and Northern Ireland, and with those three nations would make up a properly federal United Kingdom. 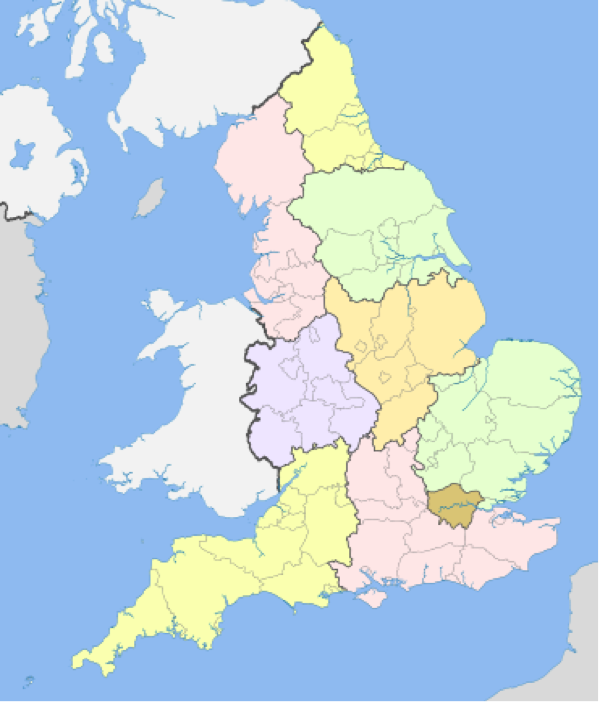 Each region would need to have a publicly elected chamber to which the governing body would be accountable, as is the case in Scotland and Wales and, in better times, Northern Ireland. It is in my view essential that the unrepresentative and discredited First Past the Post system be abandoned and replaced with a fair, reasonably proportional, system that makes space for other points of view from parties other than Labour and Conservative.  The Single Transferable Vote system which is used in N. Ireland, and has been approved (July 2019) in the Welsh Assembly for future elections there would be far more suitable.  (It is also used in Scottish local authority elections).  The county councils would become redundant, and should in effect be merged into the larger regional entity.  District councils and their urban equivalents could remain much as they are.

Debate would be needed to determine the initial extent of devolution of powers to the new regions. No doubt this would be quite modest to start with, while the new order bedded down, but over time, there is no reason why they should not all aspire to the relative autonomy that Scotland enjoys currently.  Nevertheless, there should be means for ensuring that, in areas such as health and safety and the environment, regulatory differences are kept to a minimum, so businesses can, wherever practicable, operate uniformly over the whole of England, at least.

That would in turn necessitate wholesale reform of the Parliament at Westminster.  Its functions would be largely confined to the economy, foreign affairs and defence, along with supervision of how the federal structure and its organs are operating.  The Commons should have its membership dramatically reduced – e.g. to 250 (?) – and the House of Lords ought to be cut back correspondingly.

And that would almost certainly lead in its turn to the drafting, adoption and entrenchment of a written constitution for the United Kingdom, and not before time.  I will not attempt go into greater depth on this topic here, if only because others much better equipped than me have given much thought to the issue already.

I am well aware that my proposals above for constitutional reform of the UK are not likely in themselves to excite the average man, or woman, in the street.  Even so, they are, to my mind, an essential underpinning for the actions that are needed to give the disadvantaged areas that voted Leave cause for hope of improved lives for them and their children in their communities, with the government of day-to-day affairs of most concern to them (e.g. housing, education, transport, hospitals, etc.) being by people who are predominantly from their own region.

Clearly there must be a new financial settlement to ensure a fair distribution of such wealth as the UK has to where it is most needed across the whole country.  More specifically there must be a huge investment in infrastructure, especially in the north of England, notably in public transport, but also wherever possible in industries focussed on new technologies.

There has been considerable talk of a Green New Deal, concentrating on all the changes that the country – and of course the rest of the world – needs to undertake both to fight climate change, and also to ensure that we all adopt sustainable lifestyles – sustainable in terms of consumption and recycling of all the planet’s natural  resources: a goal we are currently nowhere near to achieving.  The Government must embrace this challenge, and ensure the investment to give it effect occurs at least as much in the UK’s deprived areas as elsewhere.

The London4Europe blogs page is edited by Nick Hopkinson, Vice-Chair. Articles on this page reflect the views of the authors and not necessarily of London4Europe.