L4E secretary Andy Pye talks to his friend and former business colleague Chris Rand, who came down from Cambridge to experience his first London march for the Remain campaign.

The Remain campaign is now more than a protest. We are, as Mike Galsworthy (Scientists for Europe) says, building a community. A community which is based on a solid foundation, is here to stay and will sustain until the end of the Brexit episode. It is a community which can put comfortably over a million like-minded people onto the streets of London. A community which can get over 5 million people to sign a petition to Revoke Article 50. Please sign if you have not done so to date. Both of these figures are unheard of in previous protest movements. How extraordinary that as many as 1 in 40 of the entire population of the UK took time off to visit London and protest - just think of what that means. 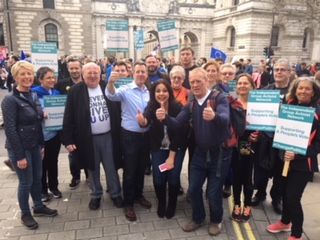 Where is the biggest concentration of political engagement right now? It's not with the Tories, or Labour, or the Farageists. It's Remain - an unprecedented grassroots movement that has nothing to do with the old politics and is set to turn it upside down. Ignore it at your cost.

Talking to a marcher in the park, he emphasised one important fact to highlight that hasn't had any press coverage. A march of over a million with no violence - not even smashed windows - is extraordinary and perhaps unique. Contrast that with leave death threats. In fact, we don't need to make the contrast. It's there for everyone to see. But we should emphasise it again and again.

My friend and former colleague Chris Rand came down from Cambridge on the morning train. The crowds were so large that we only met up via text! He takes up the narrative:

"I wonder what the early 80s me would have said, had he seen a vision of me standing in Whitehall in my fifties cheering Michael Heseltine? Actually, they'd probably have said: "I knew you'd turn into a Tory", and then been even more confused to find out they were wrong!

"Sometimes big events happen, and you could have gone but didn't. We all have our regrets: for me it's Live Aid, the fall of the Berlin Wall and the Iraq War march. I could have gone to see each of them. I made my excuses. This morning I woke up and thought: "The People's Vote March is going to be huge, and I'm an hour away on the train. Of course I'm going to go". And so I did.

"What a fabulous event. A million people, they say. And everyone was so nice – it was an utter pleasure to chat to every stranger I met (four of them MPs!). It made me realise something else: EU membership/Brexit is a political issue, but the reason it's divided parties is because the side of the fence you sit on isn't to do with politics – it's to do with the way you look at life.

"Today's march was for the positive people, the outward-looking ones – yes, the sort of people I want to spend my life with. Many miles away, the execrable Nigel Farage sat in a sad pub car park with a few dozen supporters and even on the TV, you could just feel the spitefulness in their comments. 'No more Mr Nice Guy,' he promised. Yes, half of the country may have voted for Brexit, but maybe that's because half of the country are joyless people; they're driven by what they resent. Many have been dealt a bad hand, and have an excuse. But others are just awful individuals."

Perhaps it is unfair to say that all leavers are joyless? Some were misled by the lies on the red bus of promises to plough more money into the NHS if we left and who wouldn’t want that?

"It is true that many people were misled," says Chris. "People I've met who've changed their minds are usually the sort of caring folks who I would have been surprised to have found voted to leave in the first place. There seem to be surprisingly few of them, however, and that's why I think the reason for voting to leave the EU comes from something deeper than conventional politics. After all that we now know to be true, it's been my experience that 'leavers' who haven't changed their minds are people whose outlook is driven more by distrust of others. The reason we're still waiting for a rational economic explanation to leave the EU is that there never was one; it was about wanting to close our doors on those who aren't like us."

But this was a good day that shows we have a chance of digging ourselves out of the Brexit madness. There were many leave voters present who had changed their minds and were now directing their anger at the lies of the Brexiteers.

Final words from Chris: "A million people in London this afternoon were from a different half of the population – the ones who are driven by what they love. Count me in with those."

The London4Europe blogs page is edited by Nick Hopkinson (Vice-Chair). Articles on this page reflect the views of the author, not necessarily of London4Europe.

Do YOU have experiences to share about Saturday's Put it to the People March? If so, why not send them to us as a blog?
[email protected]