If politicians were serious about tackling the cost of living crisis, they would seek closer relations with the EU, argues Vice-Chair Nick Hopkinson.

As the cost-of-living crisis deepens, more and more households across the country are suffering. The UK head of energy giant EON recently warned of a two fold increase in fuel poverty.  Analysts warn of the worst plunge in living standards since the 1950s. So much for the sunny Brexit uplands.

The Government finally announced a meaningful plan to tackle the cost-of-living crisis on 26 May. However, many believe this was more a rushed cynical attempt to distract voters from the final Sue Gray Report on the PartyGate scandal. In the preceding vacuum, Conservative Ministers offered personal financial advice, such as buying supermarket value brands and not buying petrol at expensive motorway stations. Duh! Actually, we did not need ‘our’ representatives to offer patronising advice, implying we can resolve cost of living challenges ourselves.

Unfortunately, opposition politicians did little better. Calls for a windfall tax on energy companies, raising up to £2 billion according to one estimate,  were a token populist, short-term fix, falling well short of what Brexit has already cost us. In the end the Government’s announced a £15 billion package of measures which falls far short of the adverse impact of Brexit as the Government’s own economic studies show.

One can only conclude that most politicians lack the courage to address all the causes of the crisis. One cost-free partial solution stands out: advocate and progress closer relations with the EU.

Sadly, the Brexit project has “benefited” from two major international crises which have masked the adverse impact of Brexit. While Covid is judged to have a major short term effect on the economy, studies show Brexit will have a greater longer term impact. The jury is still out on Putin’s ill-judged tragic invasion of Ukraine.

These major crises have reduced the perception of Brexit as a major public concern. Brexit has declined rapidly from being one of the top three public concerns in September 2019 (with 73%) to 50% in November 2020, 25% in May 2021 and now just 18% in May 2022. Meanwhile, health and economic concerns have of course shot up the agenda.

Nevertheless there is a correlation between Brexit and low growth in the UK as the IMF bar chart of GDP growth in major European economies between 2015 and 2022 and OBR forecasts shows. 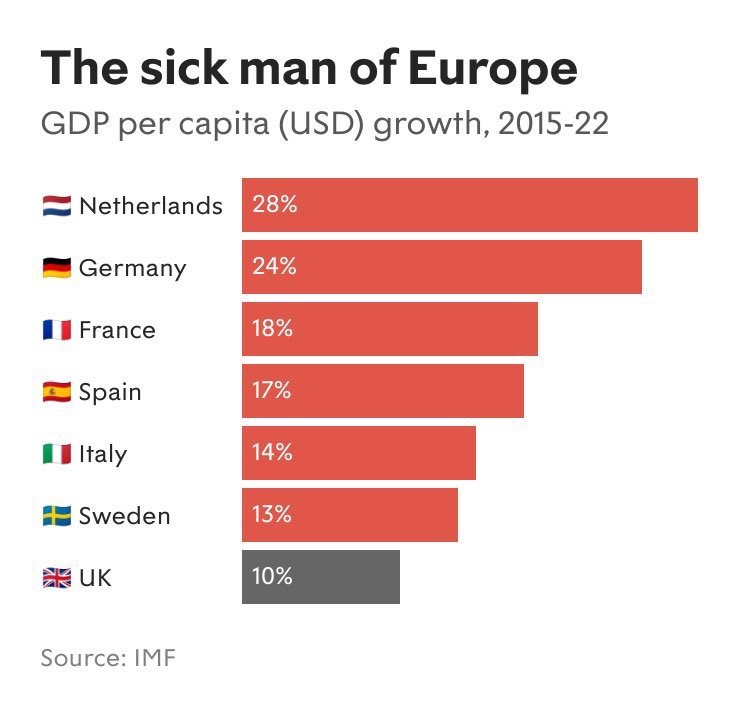 Brexit may not the main driver of inflation, but as former Monetary Policy Committee member Adam Posen testified recently to MPs, “A substantial majority of the inflation differential for the UK over the euro area is due to Brexit”. The adverse inflationary impact of Brexit is even more pronounced when it comes to the increasing cost of food.

Lower economic output means lower tax revenue. The Office of Budget Responsibility (OBR) predicted Brexit would result in a £20-40 billion annual tax shortfall. In short, had we stayed in the EU, the Government would have had greater fiscal flexibility to offer more help to those most adversely affected by the cost-of-living crisis. It is unacceptable for politicians to ignore this.

Opposition politicians can no longer remain silent on Brexit, or ignore the evidence of its harm.  To do so is fail to understand why Labour did poorly in the 2019 election - as a Labour Peer and former Europe Minister argues. Arguably, opposition parties may have been right not to waste political capital and airtime on an issue not uppermost in voters’ minds during the peak of the pandemic, but continuing to acquiesce to the prevailing conspiracy of silence about Brexit will prove self-defeating.

While the moment to start campaigning in earnest to rejoin the EU may be years away, that should not stop opposition parties from advocating closer relations with the EU in parallel to other major campaigns. Closer relations with the EU will of course not be espoused by the Conservative party (backtracking on Brexit would be political suicide), but opposition parties -  and perhaps some brave Conservatives - should start arguing that the British people would be better off if the Government softened, and eventually ended, Brexit.

There is evidence to suggest voters already draw a link between the cost of living crisis and Brexit. One-time ‘In Politicians’ who say ‘I supported Remain’ - and then pompously declare themselves to be a democrat, and, more recently, those who avoid using the word ‘Brexit’ at all will not win respect and support. Hypocrisy, inconsistency and failing to listen to voters all erode trust in politicians and democracy. If opposition politicians want to form the next government, they must oppose the Government on all leading issues, including Brexit. If politicians start proposing remedies to all main root causes of our current problems, they might energise pro-European activists, gain wider public support and win more elections.

London4Europe blogs are edited by Nick Hopkinson, Vice-Chair. Articles on this page reflect the views of the author and not necessarily of London4Europe