DEBUG: https://assets.nationbuilder.com/london4eu/pages/5/features/original/heart_photo.png?1501497680
DEBUG:
DEBUG: blog_post
If hydrogen molecules can collaborate with their neighbours, why not the UK?

At some point in the future, the JET process for nuclear fusion promises to generate huge amounts of energy. Andy Pye, Secretary of London4Europe and a senior editor in the manufacturing press, started his career as a materials engineer at the Fulmer Research Institute, which, way back in the seventies carried out related programmes of work (*). He now reviews the evolution of this European project.

Global power demand is expected to double by 2040 and could increase five-fold by 2060 as electrification expands. A global objective is to build the first fusion power plant capable of supplying grid-scale electricity with zero emissions of climate-altering gases. It is projected to succeed in one or two decades, which is a rather short period when the earliest scientific investigations into fusion date back to the 1930s and the Tokamak solution was born in the 1950s.

Fusion research aims to copy the process which powers the Sun for a new large-scale source of clean energy here on Earth. When light atomic nuclei such as hydrogen fuse together to form heavier ones, a large amount of energy is released. To do this, fuel is heated to extreme temperatures, hotter than the centre of the Sun, forming a plasma in which fusion reactions take place. A commercial power station would use the energy produced by fusion reactions to generate electricity. 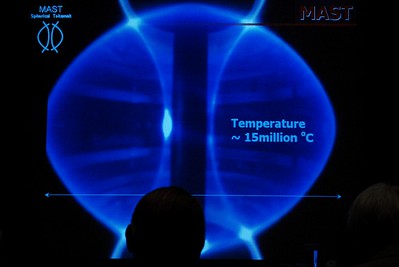 Fusion has huge potential as a long-term energy source that is environmentally responsible (with no carbon emissions) and inherently safe, with no dangerous levels of radiation, and widespread fuel resources (the raw materials are found in seawater and the Earth’s crust). But nuclear fusion involves the containment of a plasma, a super-heated and electrically charged gas composed of positive ions and electrons that move freely in it. Plasma is difficult to produce and control and is subject to several types of instability. A device called a tokomak is used for the magnetic confinement of the plasma. It consists of a complex system of magnetic fields that confine the plasma of reactive charged particles in a hollow, doughnut-shaped container.

In 1968, when fusion research was in the doldrums, the Soviets held the periodic meeting of fusion researchers in Novosibirsk, where they introduced data from their T-3 tokamak. This represented a dramatic leap in fusion performance, at least 10 times what the best machines in the world had produced to that point. The results were so good that some dismissed them as faulty measurements. To counter this, the Soviets invited a team from the UK to independently test their machine. Their 1969 report confirmed the Soviet results, resulting in a "veritable stampede" of tokamak construction around the world.

To read the British press over the past week, you wouldn't think so, but JET stands for Joint EUROPEAN Torus. It's not a solely British project, as the Daily Express would have us believe, but a project which began under the auspices of the European Atomic Energy Community (EURATOM) - you know, that organisation that we pulled out of as part of the Brexit fiasco.

In 1971, the member states of EURATOM decided in favour of a robust fusion programme and provided the necessary legal framework for a European fusion device to be developed. In 1975, the first proposals for the JET machine were completed. Detailed design took three years. At the end of 1977, after a long debate, the Culham Science Centre near Oxford, operated by the UK Atomic Energy Authority (UKAEA), was chosen as the host site for the new design. Funding was approved on 1 April 1978 as the "JET Joint Undertaking" legal entity. It was commissioned in 1983.

Scientists from 28 European countries use JET to conduct research into the potential for carbon-free fusion energy in the future, through work coordinated by the EUROfusion consortium, a massive scientific partnership including 5,000 professionals from throughout Europe and financed by the European Commission, which manages and funds European fusion research activities on behalf of EURATOM.

In fact, 30 research organisations and universities from 26 European Union member states, plus Switzerland and Ukraine, are part of the consortium. In addition, well over 150 universities contribute to the programme. The Consortium received funding from the EURATOM research and training programme in 2014-2018 and 2019-2020 under grant agreement No 633053.

On 21 December 2021, JET produced 59MJ using a fuel mix of deuterium-tritium (heavy hydrogen isotopes), while sustaining fusion during a 5s pulse. The previous record, achieved in the same reactor in 1997, was an energy output of 21.7MJ.

Although these numbers sound large, they are still small — roughly equivalent to the energy required to run a kettle in normal use for two months — but the result is a vital proof of concept.

This record output is also JET’s last great hurrah. Hailed as a “crucial test bed” for fusion research for decades, the JET reactor design was pushed to its limits with this most recent experiment. If practical fusion generators can be made, they will have to be based on newer reactor designs. Now, its primary task will be to prepare for the construction and operation in the south of France of the International Thermonuclear Experimental Reactor (ITER), and to act as a test bed for technologies and plasma operating scenarios. Future fusion power reactors will resemble JET, will employ the same fuel mix and will operate under comparable conditions. JET can advance no further because its copper electromagnets get too hot. Internally cooled superconducting magnets will be employed for ITER.

But before reaching this landmark, Brexit threw a shadow over the plans for JET in 2017, as its work is covered by the EURATOM Treaty, which the UK Government decided to leave, as part of the process of leaving the EU.

Talks on the funding after 2018, when the five-year plan expired, commenced and a new agreement to extend JET's operation until 2019 or 2020 appeared to be largely complete. These talks were put on hold due to Brexit. Prior to an agreement being reached the UK Government website said "The UK government is committed to nuclear research. This will mean continued domestic research, as well as its other international partnerships, to ensure the UK retains its world leading position in this field."

However, in March 2019, the UK Government and European Commission did sign a contract extension for JET. This now guarantees JET operations until the end of 2024, regardless of the Brexit situation. This news also brought reassurance for 500 staff at Culham, near Oxford. The Science Minister at the time was Chris Skidmore, who said "Science has no borders and as we leave the EU, this kind of international collaboration remains at the heart of our modern Industrial Strategy to maintain the UK’s position as a world leader in research and innovation."

The agreement allows the UK to participate from 1 January 2021 in:

Under the agreement, UK scientists, researchers and businesses will be able to participate in and bid for competitive awards from the Euratom R&T Programme. UK participants will be able to lead consortia and distribute funding to other participants. Importantly, UK researchers and staff can continue working at ITER from 1 January 2021. This agreement is subject to ratification of the overall deal and finalisation of the EU’s budget and the Programme regulations.

How much easier this might have all been had we remained in EURATOM in the first place.

Prof Ian Chapman, CEO of the UK Atomic Energy Authority, said at the time: "The extension to the contract is excellent news for both EU and UK science. JET has been a shining example of scientific co-operation between EU members, and this news means that these mutually beneficial collaborations will continue, allowing us to do essential experiments on the path to delivering fusion power.

Prof Tony Donné, Programme Manager of EUROfusion, added: "A heavy weight has been lifted off our shoulders. This is extraordinarily good news for EUROfusion and the European fusion community as a whole. We can now continue to work on the realisation of fusion energy together with the indispensable experience of our British partner."

However, given the volatility of current British Government appointments, future support cannot be taken for granted. Skidmore was appointed Minister of State for Universities, Science, Research and Innovation on 5 December 2018, following Sam Gyimah's resignation over the government's Brexit policy. He was opposed to Brexit prior to the 2016 EU membership referendum. In February 2018, he argued in a speech to the Centre for Policy Studies that his party needed a broad and positive policy programme to gain wider support, further stating: "If we are just going to talk about Brexit then the Conservative Party will rapidly decline."

Following the appointment of Boris Johnson to Prime Minister of the United Kingdom in July 2019, Skidmore was moved to the Department for Health and Social Care, serving as the Minister of State for Health.

But following the resignation of Jo Johnson from cabinet, Skidmore re-assumed his position of Minister of State for Universities, Science, Research and Innovation in September 2019. However, following the November 2019 election, he was dismissed from government and replaced by Michelle Donelan in the cabinet reshuffle of February 2020.

Donelan has served as Minister of State for Universities since then. Before the 2016 referendum, Donelan was opposed to the UK leaving the European Union, but since then has consistently voted against UK membership of the EU in Parliament.

(*) Former colleagues of mine at the Fulmer Research Institute (which closed in 1990) say that the JET experiment is a direct descendant of an experiment called ZETA at the Atomic Energy Research Establishment 10 miles away at Harwell. In 1957, when ZETA went into operation it was the largest fusion machine in the world. ZETA is well described in a very full article in Wikipedia.

ZETA produced huge numbers of neutrons and rash claims were made, eagerly amplified by the press, that it had achieved fusion.  An embarrassing retraction was needed when it later turned out that the neutrons were produced by electrical effects in the plasma and that fusion had not been achieved. Despite this setback, ZETA laid the essential groundwork for the success of JET and our current hopes for the ITER project in southern France.

Although I was never directly involved in these projects, Fulmer's aim had been to coat the aluminium surface with vitreous enamel, to provide an electrically insulating layer of complete integrity. There was also a project to look at the use of lasers for surface engineering.  Lasers were still quite rare and expensive - one area of particular interest was the potential to produce amorphous layers. It all looked promising and indeed laser glazing is now a commercial process, along with lots of other uses of lasers (which are now very common and relatively cheap).