The statistics shown by Eurotracker are an excellent compilation of point data from the various surveys taken of voter intentions in London for the European Elections. But how accurate are they?

Because of the small sample sizes, the charts have a characteristic "saw-tooth" profile, because the variables (who was asked, when, how, etc) create the impression of wild swings in voter intentions. An analogy would be to monitor coin tosses - if only two coin tosses were taken, it would be easy to gain the impression that a coin always comes down heads in one week and then tails the following week. But if 1000 coin tosses were taken every week, then the accuracy of the analysis is much greater.

In the industrial publishing industry, we like to measure trends in year-on-year advertising volumes. But there are many variations, not least seasonal variations. We sell more advertising in the autumn than we do at any other time of year, and small volumes in midsummer and around Christmas/New Year. So we use a system called Moving Annual Total, where we monitor the total of ver the last 12 issues (if the magazine is monthly) and this gives us a more accurate measure, removing seasonal variations and increasing the effective sample size.

So I have applied a similar concept to the European Election chart, instead of publishing each point, plotting the average of the last 10 measurements. In effect, this is a form of trendline designed to remove natural variations.

You can see the results in the chart below. This is not a perfect analysis - the newer parties have only had 10 sample points for a shorter time. Where a party has fewer than 10 (say n) data points, I have taken the average of the n points and divided it by n. This means that the more recent measures (those on the right) are more accurate than those on the left. It also means that in the middle of the chart (the shaded area) , the total of all polls does not necessary add to 100. 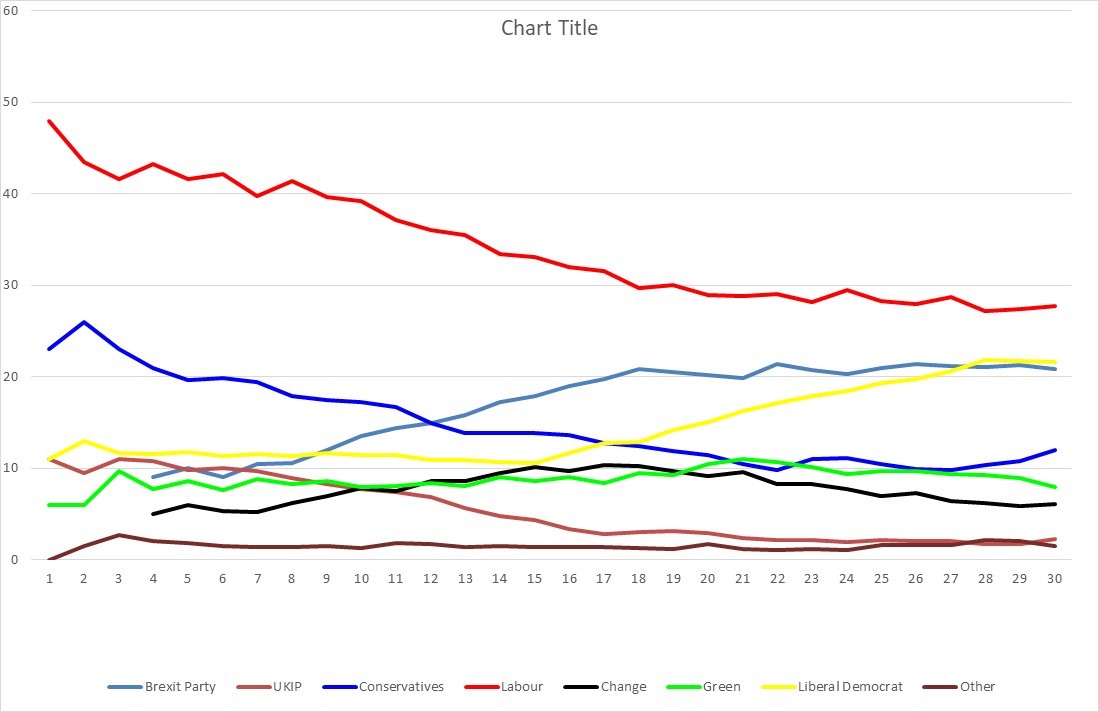 What does the chart tell us? The key conclusions are as follows:

I have also recorded in the table (Total Brexit - Lab) and (Total Remain+Lab) - you can see how crucial it is for the Remain (or PV!) case to include Labour, otherwise Remain appears to be completely out of it.
Including Labour as a Leave party means that Leave beats Remain by about 2 to 1. But we know that >80% of Labour voters are Remainers, so including Labour as a PV party is a valid statistic, even if the Labour Leadership aren't totally behind Remain. Including Labour as a PV party means that PV beats Brexit by around 2:1. Remember these are London results, not national ones!
.
.