It’s not the real issue for the Remain movement

We have argued that the elections matter in their own right and that it is good that voters are presented with a wide choice of what pro-EU parties would do for Europe.

For those who wish to take the European elections as a referendum on Brexit, which we do not recommend, it is anyway votes that count not seats.

You can read an explanation of the D’Hondt system for allocating votes to seats here. While it is reasonably proportional it still favours large parties or coalitions. There are more comments on D’Hondt in the annex at the end of this article

The results a Remain Platform would have scored

We have been publishing a series of blogs that convert individual polling numbers for London into seats. Periodically we bring the results together in trackers. The caveats about polls apply even more than usual: London respondents are a small subset of the total panel so the figures are less reliable than usual.

Those blogs also provide a counter-factual scoring that shows what would have happened if the three Remain parties had formed a common platform and received the same number of votes in total as they received as individual parties.

To be clear, this is a figure for the Remain platform that comes from arithmetic not from any polling evidence for what support a Platform would have obtained. There are arguments that a platform would obtain more votes than the individual parties (people back a winner) and that it would have obtained fewer (people wish to vote for their party not some amalgam).

The table below shows the seats won by the individual Remain parties, the seats for the notional Remain platform, the additional seats that a platform would have won, and which party would have lost a seat to the platform.

Rem = seats that would have been won by a Remain coalition that received the same number of votes as the parties received separately.

Loser = the party that lost a seat because the Remain coalition won an extra seat: B = Brexit Party C = Conservative, L = Labour.

As the London section of the polls is much smaller than the overall sample, error margins are higher. So all the usual caveats about polls apply even more than usual.

Data source: see individual blogs about each poll in our latest blogs section.

An opinion poll for a Remain platform

On 10 May 2019 YouGov published an opinion poll which did ask about a variant of a common Remain platform (fieldwork 28-29 April) – our blog about it here.

It asked the panel of respondents how they would vote if instead of facing individual Remain candidates they faced a single Remain candidate chosen from one of the three parties.

An implication is that the comparison I make in the Table above is a reasonable approximation to the result. YouGov assess the effect in London as being 2-3 seats for a platform as opposed to 2 seats for parties standing separately.

However, in smaller constituencies that could have a big effect on seats.

Sure, the election is about more than Brexit. Voters should be looking at the whole policy agenda that parties are putting forward for Europe and that they would pursue in the European Parliament.

But it hardly matters if voters think that the manifesto of the European Conservatives and Reformists (the European Party Group supported by the Conservatives) or that of the Party of European Socialists/ Progressive Alliance of Socialists and Democrats supported by Labour is wonderful. Their UK MEPs are not going to be able to do anything to implement those agendas if the Westminster leadership of those parties takes the UK out of the EU.

Similarly, it does not matter that both Conservative and Labour have MEP candidates who are fully committed to the future of the EU, anti-Brexit, pro-referendum if the Westminster leadership of their parties takes the UK out of the EU.

I do understand that most Labour Party members wish to Remain and that most Labour MPs back a referendum. But we do have to recognise what Labour’s policy actually is: 1. Back Brexit; 2 hold a general election in which Labour would back Brexit; and only if these preferences were unavailable move to a referendum, perhaps.  Calling Labour a Remain/ referendum party is not a statement of its policy but a forecast of what its policy might become

What the opinion polls show: Brexit or Remain?

Fortunately, the trend lines from the London section of the opinion polls are clear. In London, voters are increasingly turning away from the Brexit-backing parties and supporting Remain-backing parties. 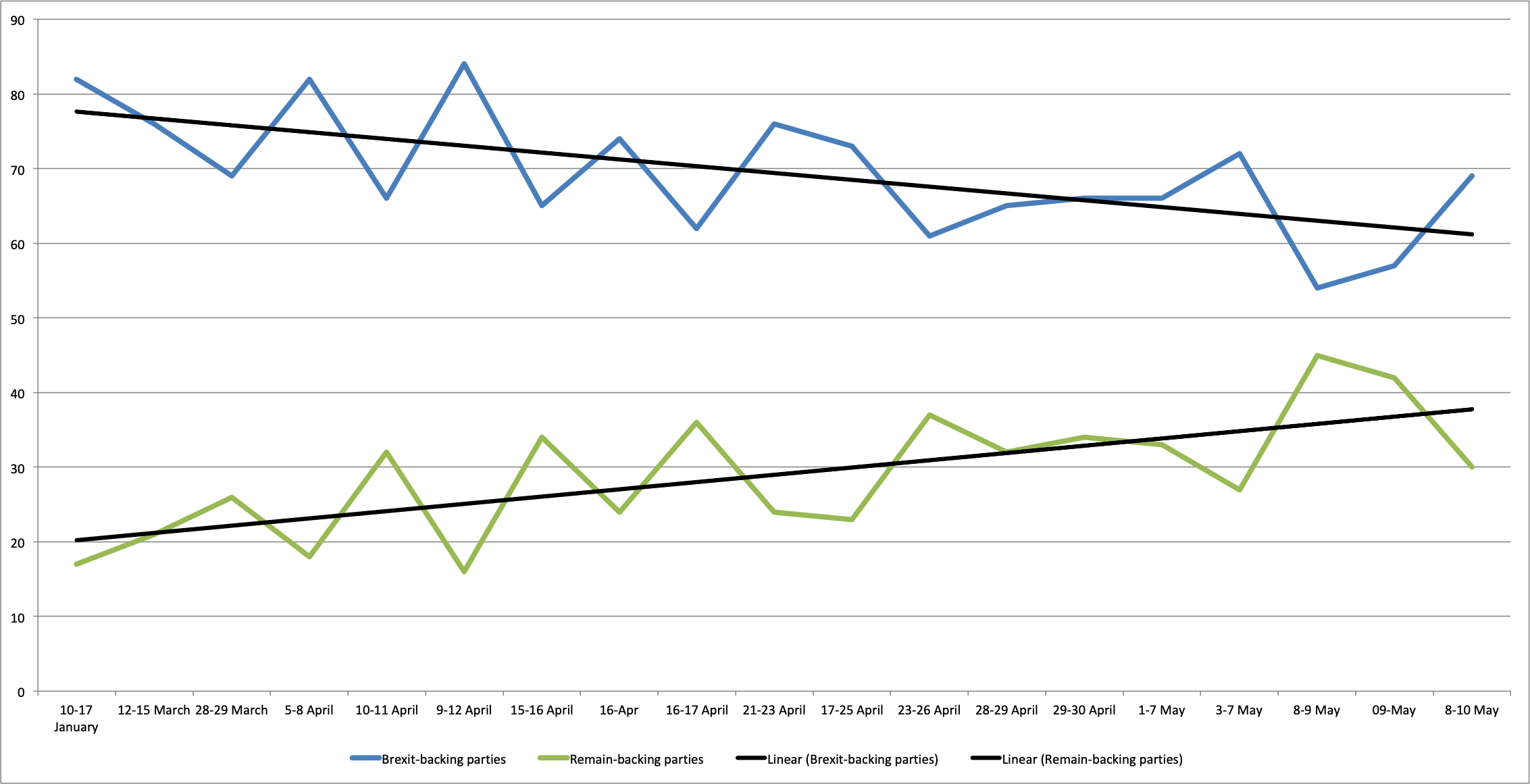 The key issue facing the Remain movement in London is not that the Remain parties have not formed a common platform. It is that many Remain voters are still voting for Brexit-supporting parties.

The London4Europe blogs page is edited by Vice-Chair Nick Hopkinson. Articles on this page reflect the views of the author not necessarily of London4Europe.

It is also less proportional when the sum of constituency results is added together: a party that won just enough votes to justify an MEP at the national level under purely proportional counting would lose out if its support was spread across many constituencies.

The fairness of the results also depends on the pattern of votes for different parties in any one election/ poll.