It'll be all right on the night!

Responding to this common rallying cry of the Brexit camp, economist Chris Swadkin* comes out of retirement to set the record straight.

Hmmm - well statistics can always be used to your own advantage, can't they?

In nominal GDP we are indeed 5th - that is total GDP in local currency converted to US Dollars. But it really reflects the size of our population, rather than our economic success. And even then, we are just in front of France and India so a further fall in the pound or lower growth next year could trash that statistic.

If we measure GDP PER HEAD we see a very different story. On this measure, we are just 23rd. Furthermore, if we then use Purchasing Power Parity (what can you buy with the GDP created as measured by a basket of goods) it gets worse!

Then, the UK is currently 9th in total GDP but 28th in GDP per head.

Perhaps we're not that big a fish after all?

* Since early retirement from oil company Shell, Chris Swadkin has dedicated his life to recreational cricket, He has been a member of Blackheath CC since 1968 and most recently has been part of successful England Over 60 and Over 70 Ashes teams. He is a past Chairman of the Kent Cricket Board. 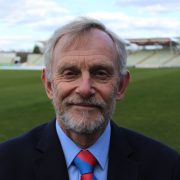