DEBUG: https://assets.nationbuilder.com/london4eu/pages/5/features/original/heart_photo.png?1501497680
DEBUG:
DEBUG: blog_post
"We are the 6th largest economy so we will be alright"

That’s not how it works

London4Europe Committee member and former HM Treasury senior civil servant Michael Romberg looks at the GDP figures. Compared to the big three economies, we are just another small country. Trade negotiations are about regulatory standards, not tariffs. Only the big three - and other groups of countries who have joined together in trade areas - are able to impose their standards.

Our standing in the world

Leavers say that the UK is the 6thlargest economy. True enough (different data sources come up with slightly different numbers – no matter: the story is still the same. Indeed, we used to be the 5thlargest economy, but the prospect of leaving the EU knocked us down a place, so we are now behind India).

Leavers go on to say that means that we will be alright. That is where it gets more complicated.

When you realize that the top three economies (USA, EU27, China) produce 57% of world GDP, our 3% does not sound so impressive. In economic impact we are closer to Turkey or Indonesia than to the three leaders.

It’s like being a cow in a stable with three elephants. Sure, most of the animals are smaller; but the elephants go wherever they wish.

The pie chart makes that clear: 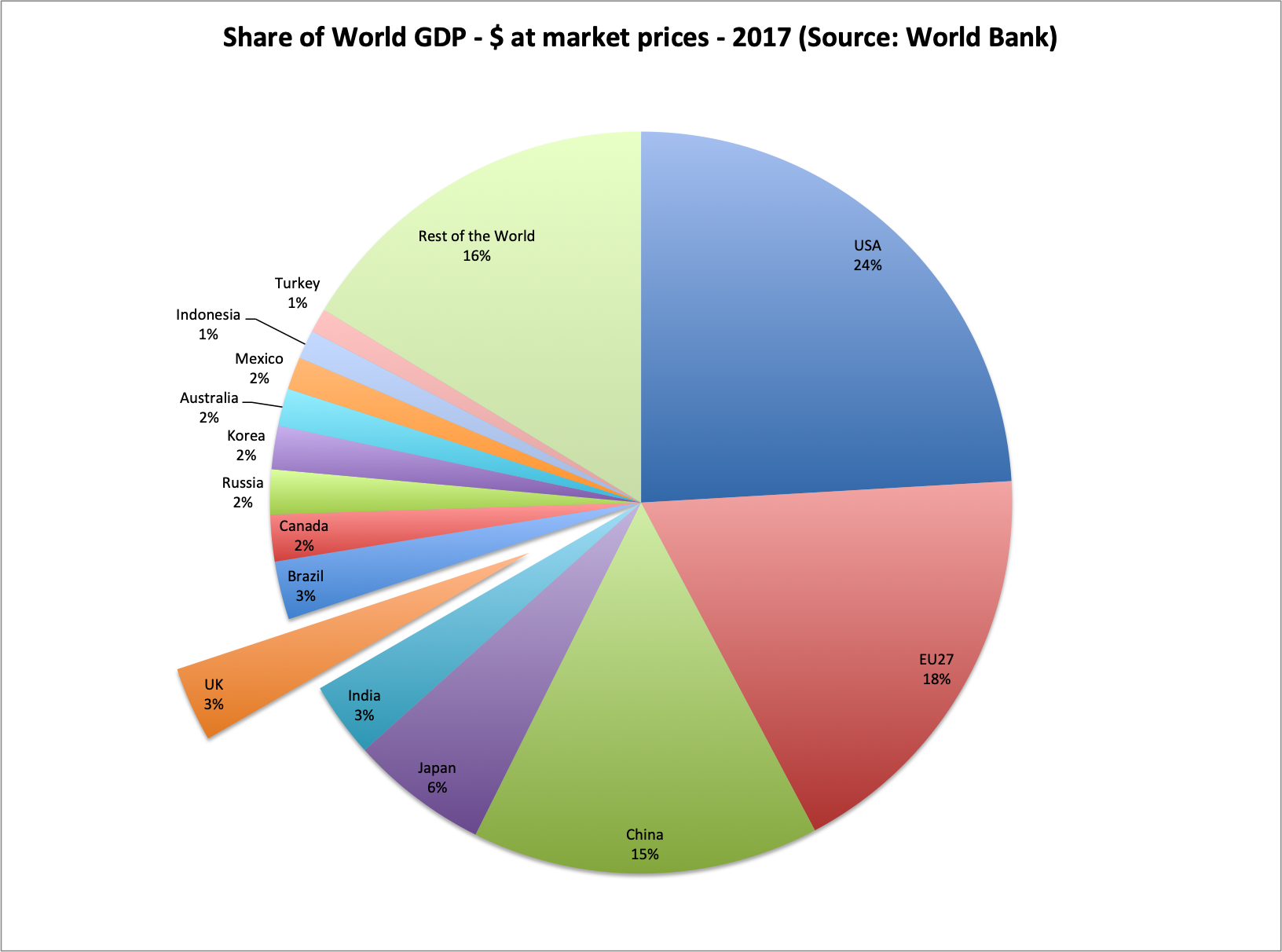 You can access the data table here and the source (World Bank) here.

Leavers misunderstand the nature of trade negotiations. They are not about like-minded countries seeking free trade by lowering tariffs. For the advanced economies tariffs are generally low and not much of an issue. The few areas where tariffs are high are usually because of well-entrenched domestic lobbies which governments are unwilling to upset.

What trade negotiations are about is regulatory alignment. Obviously, if you are based in Country A and wish to sell your goods into Country X you have to meet Country X’s product standards. Trade negotiations are about facilitating that. Ideally, Country X would treat the standards of Country A as directly equivalent – that is what the EU Single Market achieves: frictionless trade. Rarely will a Free Trade Agreement bring that. With luck, a FTA will set up a process that allows certification of some goods made in Country A so that they do not need to be checked individually at the border.

Nor is it just about product regulation. Increasingly regulations cover the process of production. That is what the dispute over chlorinated chicken is about. It’s not that American chicken smells like a swimming pool; it is that the end-to-end process does not meet EU standards and is therefore probably less safe than EU-produced food.

Other areas that FTAs increasing touch on include environmental protection and labour protection.  Generally FTA are quite shallow in these areas, but increasingly they are getting deeper.

In trade negotiations, size matters. The big three – USA, EU, China – are able to impose their regulations on others. Indeed, common regulation is the EU’s basic business model. It has been described as a “regulatory magnet” for other countries. The UK would be too small to do the same. Our sovereign choice would be whose regulations to follow.

Moreover, other countries are joining together in free trade areas, for example: Mercosur in South America (4% of world GDP); and the Comprehensive and Progressive Agreement for Trans-Pacific Partnership (13% of world GDP). As these joint areas deepen they will promote further regulatory alignment. Outside the EU, the UK will be a supplicant. The idea that the UK will benefit by leaving the European single market and becoming some sort of associate member of a trade area far away simply wishes away geographical reality: distance matters in trade (LSE blog "The Economists for Brexit predictions are inconsistent with the basic facts of international trade") and article by Martin Wolf in the Financial Times of 17 May 2019 "Global Britain is an illusion because distance has not died" link and pdf in case the link does not work.

Yes, the UK is the 3rd largest economy outside the big three. But we have only 1/18th of their combined share of global GDP. It is the big three – and the increasing number of joint trade areas – that determine regulatory standards, the stuff of modern trade negotiations. Outside the EU the UK would be a follower with no say over what those standards should be. Leaving the EU means losing control.

The London4Europe blogs page is edited by Nick Hopkinson Vice-Chair. Articles on this page reflect the views of the author, not necessarily of London4Europe.