Andy Pye explores the worrying misconceptions behind the current Government's grasp of manufacturing and finds that a little knowledge is a dangerous thing.

Two years ago, at the launch of an annual on manufacturing engineering to which I contribute, one of the then junior ministers in the Government described our European partner countries as "risk-averse", relative to the UK. I asked him why the UK ranks 22nd in the list of countries taking up robotics and automation, based on the number of robots per 10,000 employees. By this measure, we ranked behind the four major EU economies (D, F, E, I), several other EU countries, most Asian countries, the USA and were nestled neatly in the league table between Malta and Thailand. 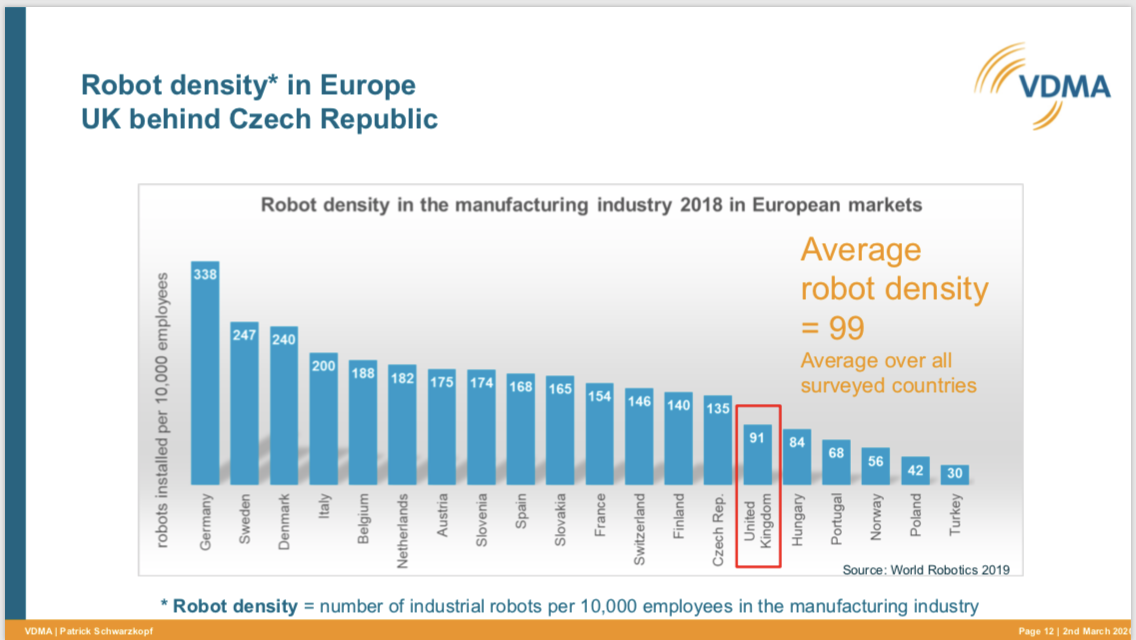 Over the past two years, of course, nothing has changed, except that the UK no longer has a pool of "low-cost" labour from Europe, and therefore if robots are intended to replace menial tasks, then now would be a good time to invest extensively. Although the argument somewhat falls down when one realises that our European neighbours always managed to invest in robotics despite free movement. How could this be?

In fact, a study of the German automotive industry has found that as investment in robots went up by 36%, employment went up by 18% as well. The new jobs are higher skilled than the menial jobs that went before – they involve working collaboratively with robots and programming them. Robots do not replace jobs, but add to them and improve their quality to boot.

Manufacturing industries based in the UK are desperate to avoid a no-deal Brexit, as deviation from European regulations and standards, the imposition of tariff and non-tariff barriers and the rules of origin will make many unviable. Most affected is the automotive industry, depending as it does on the movement of components and semi-finished assemblies across borders, sometimes several times.

But we should not fear. The Government has discovered 3D printing, an exciting technology which enables components to be literally printed from a digital file, anywhere that a 3D printer can be located. None other than Andrew Neil told the MakeUK Conference last month that the days of ‘complex, cross-border supply chains are coming to an end’ and the Government believes that the future of manufacturing is ‘3D printers’.

No longer do we need to import components from Europe when we can simply 3D print them. Right?

Sadly, this is not the case. This post shows what an ignorant and misguided view this is.

In fact, 3D printing is great as a supplementary technology for emergency spare parts, prototypes, some low volume parts and personalisation, but it is no substitute for high volume manufacturing techniques like injection moulding, CNC machining. It cannot be used to substitute the motors, drives, gearboxes and many other components that go into a modern automobile. A little knowledge is a dangerous thing!

Not to be deterred, the Government has also thrown its weight behind Industry 4.0, the so-called fourth industrial revolution whereby inanimate objects are linked together intelligently using advanced sensors. The technology can be used to feedback information about remote installations, so enabling maintenance programmes to be planned in advance. A domestic fridge could alert the local supermarket when milk supplies are running low and arrange for a fresh delivery!

Reading Government publications, one might think that no other country had heard of Industry 4.0. In fact, the term was coined by the Germans, where the technologies have been quick to take off, and so sensitive is our government about it they have renamed it 4IR. We are seriously behind in any aspect or implementation of the so called fourth industrial revolution and our main global competitors are cunningly moving towards the fifth industrial revolution (personalisation).

The idea that we are going to lead the world with our "4IR technology" is laughable. We don’t even have 5G communications, though there is a plan to roll out a 5G hub in Sunderland.  This year's Hannover Fair, if it survives the coronavirus crisis, will have a 5G Arena where companies will demonstrate industrial applications of 5G, a first for any exhibition company.

Hanover's partner country for 2020 is Indonesia and their German ambassador Arif Havas Oegroseno says that the country plans to standardise on EU standards and regulations for data security and data sharing, so a deregulating UK will place itself outside the de facto standard, thereby closing the door to selling its technologies to Indonesia. And yes, in response to a Brexiter with whom I shared this information, Indonesia is not the biggest non-EU market, but its intentions are surely indicative of a wider trend. Isolation makes it harder, not easier, to trade with new countries.

In contrast to most UK politicians, Mr Oegroseno has an excellent grasp of the priorities of the manufacturing sector in his country, citing food processing, automotive manufacture, textiles, electronics and chemicals as the five priority areas. Perhaps not an exact replica of the industries that stand to lose the most from Brexit, but fairly close. The country has its own Industry 4.0 and digitalisation roadmap and sees this as a major tool to enable industrialisation.

And as a nation comprising no less than 17,000 islands, Indonesia is also self-sufficient in fish!!