A softer Conservatism on show?

On Saturday 1 September 2019 London4Europe member Sandra Khadhouri (pictured in the 2nd photograph below) schizophrenically flitted between two events symbolising the polarisation of today’s political culture. In the morning, she visited the Tory Big Tent Ideas festival organised by former Remainer MP George Freeman, now avowedly pro-Brexit and pro-Johnson. At lunchtime, she raced to Westminster to shout Stop The Coup at police lining Downing Street. Then back to the tents!

The festival, a.k.a. Tory Glastonbury, was a day of debate in a field in the Isle of Dogs, in tents marked Global, Politics, Innovation, Society, Environment, Arts & Culture and Health. Surprisingly, the event was not solely dominated by Tory ideologues, nor was the agenda particularly right wing or libertarian. On offer were also sessions on left-leaning topics such as social justice, capitalism as success or failure, overlooked communities, environmental protection, health inequalities, bringing Britain back together. These laudable topics would have held more currency if the Government weren’t exacerbating the problems on a daily basis with their all-consuming pursuit of Brexit and manipulation of process. But was this at least the start of an attempt to reclaim a softer, more reasonable Conservative ideology, and admit things weren’t going too well? 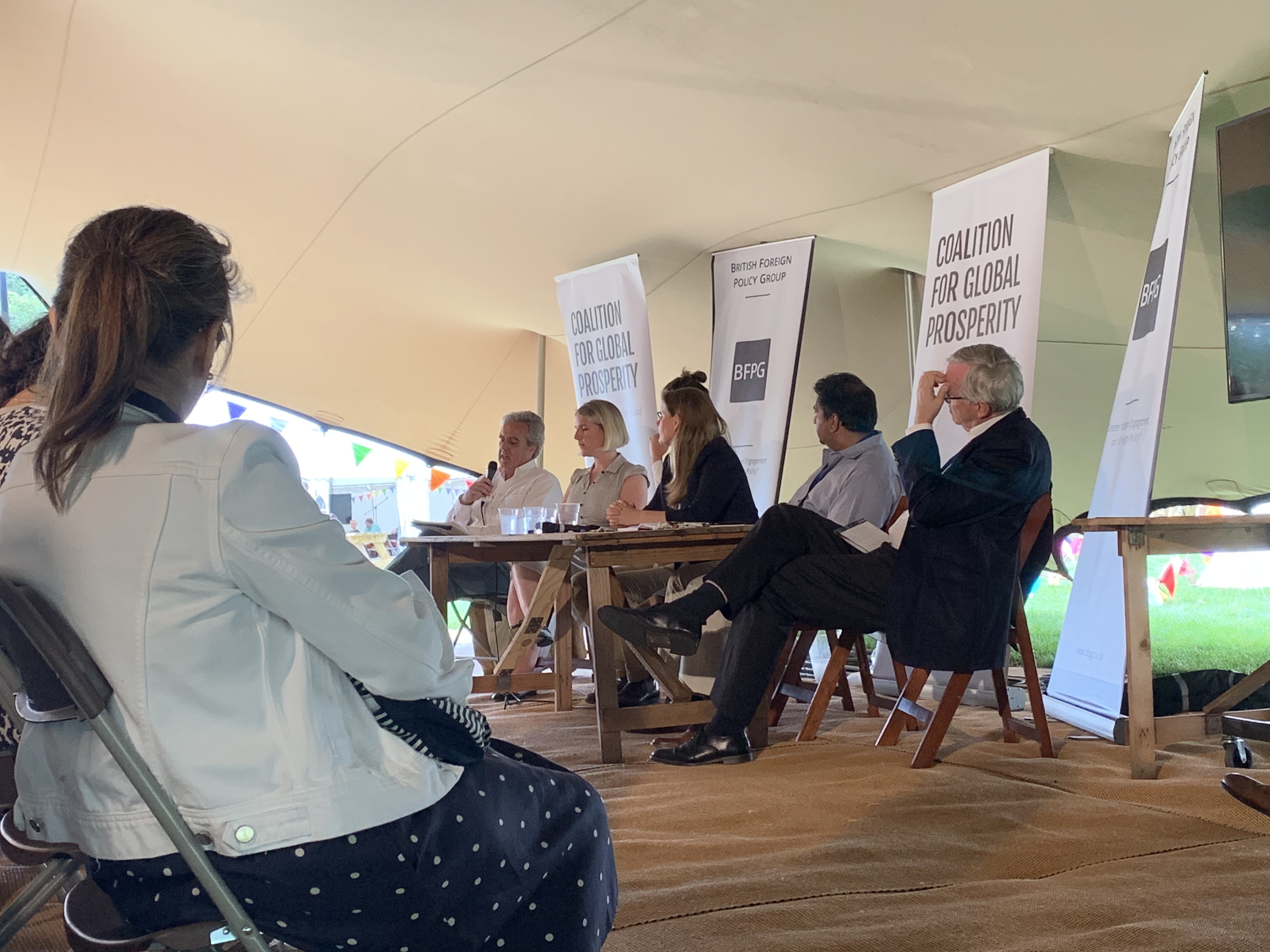 Rory Stewart set the scene – condemning Johnson’s high-risk strategy of pursuing No Deal in a Do or Die scenario, but winning a round of applause when pledging to prevent a Corbyn Government. In “Britain’s Place in the World”, discussions centred round the need to choose our foreign policy focus and values, and then convince the world and international organisations that UK wants to remain a key player despite Brexit. The discussion was a great improvement from last year, when Brexit damage to our international influence wasn’t even admitted as a starting point. Conservative MP for Bournemouth East and former undersecretary for Defence Tobias Ellwood spoke about hybrid warfare, China and Russia and the weaponization of space. My question on whether UK itself was a victim of hybrid warfare was evaded. Another MP talked of a new world order where we must face the mercantile expansion of China, and a US challenge to global rules. Another MP spoke about this being a moment for ‘liberal democratic nationalism’ – which sounds like having your cake and eating it. 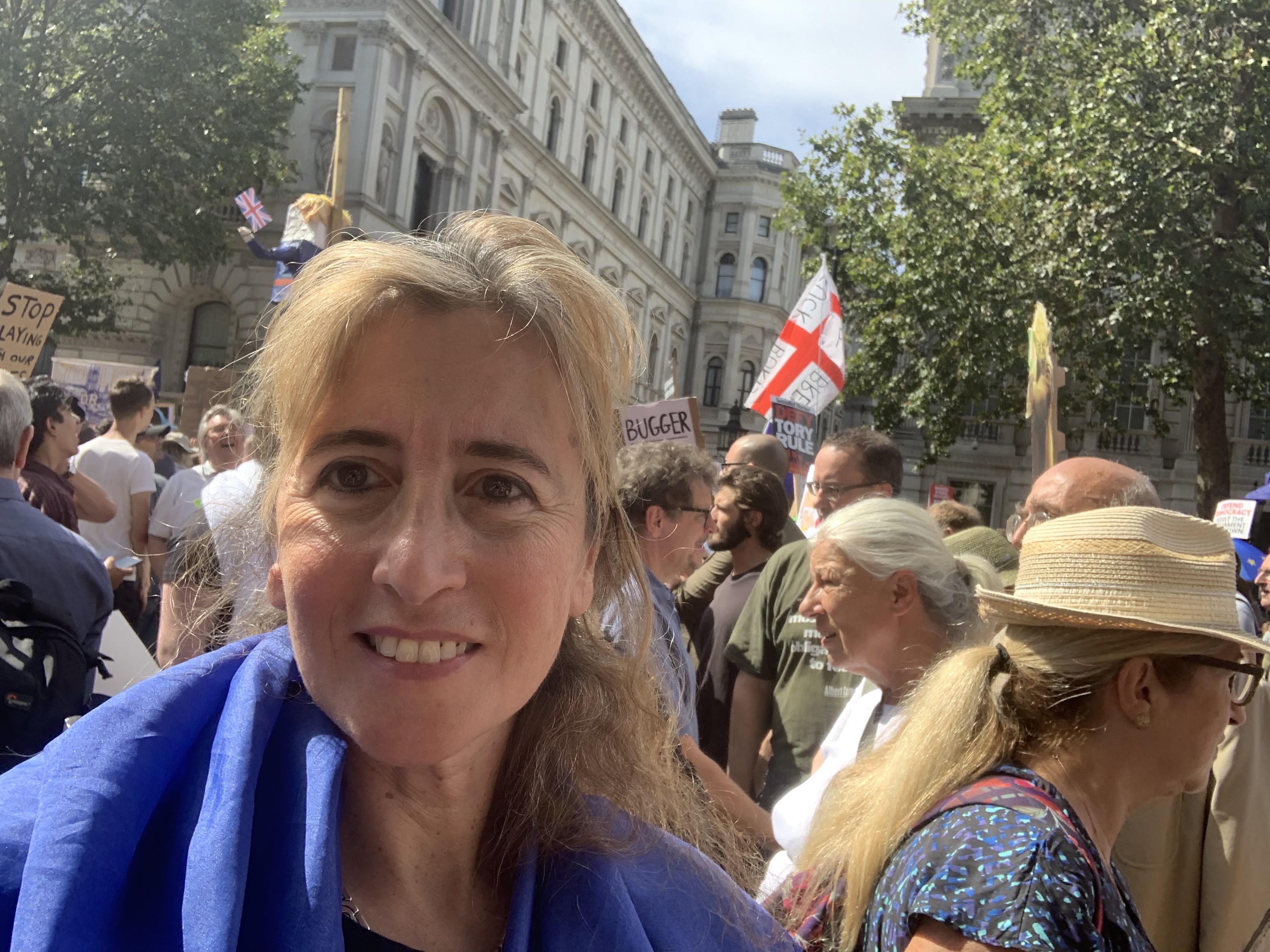 After racing back from the Westminster protests, I attended another session, called ‘Trading Places: Britain’s Trade Partnerships with Emerging Economies Post-Brexit’. Recognising UK was now a solo player on the global scene, we heard that the best Free Trade Agreements would be created where trade already exists, and Britain should work up to more complex deals like Trans-Pacific Trade Partnership later on. Panellists tried to be upbeat - but other trade deals are years off and hypothetical so no promises could yet be made. Mark Garnier MP, former under-secretary of state for international trade said UK needed to support global rules-based systems like World Trade Organisation or Organisation for Economic Co-operation and Development. I managed to ask whether other agreements would compensate for a decline in EU trade, and whether being in EU had REALLY stopped us trading with others. I was told the goal was indeed frictionless trade or something close to it – ‘Like we have as a full EU member?’ I asked cheekily. I wasn’t booed, at least – more progress.

Worries about lack of faith in democracy

In “Death of Democracy”; academics and government representatives debated the rise of populism and the decline in satisfaction with democracy across the world including in UK and US. Panellists pointed to trends showing millennials didn’t value democracy as much as their elders, and are more willing to express support for authoritarian alternatives. Lack of faith in democracy was linked to lack of trust in institutions, fuelled by misinformation, and western failure to promote democracy as a global value. Damian Collins, chairman of the Digital, Culture, Media and Sports Committee, referred to the rise of fake news as more prevalent than real news on Facebook in the US. He called for emergency legislation and transparency over public finances, to prevent the funding of disinformation and expose sources. The rise of tech firms in shaping our society, meant that there was a need to reimagine a new social contract of citizen, government and tech, suggested one analyst. Sticking my oar in, I asked whether we could address the elephant in the room – that the Conservative government had helped pollute and confuse the information space by undermining experts, Remain voices and politicians and the EU. This time, I got a few claps.

Some fruitful exchanges occurred behind the scenes. There were arguments about whether London’s role as a financial centre would remain intact – an economist from the conservative thinktank, Institute of Economic Affairs, maintained there had been zero negative impact on the City since Brexit, despite my protests about departing banks and the European Banking Authority.

I waited to talk to another MP, behind an Albanian political party representative attempting to win him over. “We too are a right-wing party,” he effused, “who believes in the free market and won’t be in EU for 10 years, so we have a lot in common!” “Indeed,” chortled the MP. “You will be joining, just as we are leaving.” When my turn came, and I confronted the MP, he quickly dropped the façade: “Of course, you’re right about Brexit damage. I argued passionately for Remain. But we have to move forward.”

This happened several times during the day – a Conservative speaker would ardently defend the government position but privately admit the criticism. Still, they were driven by the ‘sacrosanct’ June 2016 vote, even while admitting interference and social media manipulation. They also denied a significant number had changed their minds – people were entrenched, I was told, and another marginal vote would be more divisive. None of the MPs I spoke to would try to stop No Deal, saying it was only a means to an end and wouldn’t happen. Were they trying to convince themselves, or me?

I felt the atmosphere was not as bullish or self-assured as last year. I detected chinks in the armour, an unease among thoughtful Conservative supporters unable to fully justify their party’s behaviour. As a Remainer, I felt more able to pose my questions and the conversation was more critical of today’s state of affairs. And while there wasn’t exactly public ownership of mistakes, the acknowledgment of damage was on clear display. And that, at least, is a start.